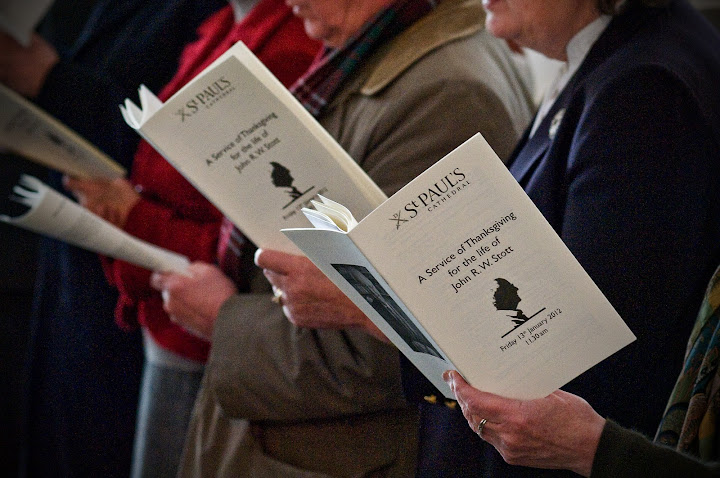 The majestic stone columns and arches of St. Paul’s Cathedral glowed in the honeyed light of the winter sunshine, while Christopher Wren’s great dome resounded to the music of organ, orchestra, choir and two thousand voices giving glory to God in thanksgiving for the life and ministry of Rev. Dr. John R. W. Stott (1921 – 2011). The service was held on Friday,  January 13th, 2012 and drew people from the corners of the UK and many parts of the world.

Music for the service was led and arranged by Dr. Noel Tredinnick with the All Souls Orchestra and a gathered choir, along with soloist Elisabeth Crocker. The hymns, some of which were chosen in advance by John Stott, included “Sing to God New Songs of Worship,” written by Bishop Michael Baughen who presided, and “Lord for the Years,” written by Bishop Timothy Dudley-Smith, who preached. The service opened with a welcome and bidding by Canon Mark Oakley, Canon in Residence at St. Paul’s.

Tributes began with Frances Whitehead, John Stott’s secretary for 55 years, who was converted to Christ through his preaching and thanked God for his life — marked to its very end by faith, hope and love, along with grace and truth. Stott’s global influenced was recognized in tributes brought from Asia, Africa and Latin America by, respectively, Archbishop John Chew (Singapore), Bishop Robert Aboagye-Mensah (Ghana), and Ruth Padilla DeBorst (Costa Rica). All spoke of the influence in their continents of his life and friendship, as well as his teaching. Ruth Padilla DeBorst stressed how Stott had listened so deeply to his friends and allowed the realities of poverty and injustice in Latin America to stretch, challenge and inform his own worldview and his understanding of the scope of gospel mission.

In his sermon, Timothy Dudley-Smith, one of Stott’s oldest friends since their student days at Cambridge, preached from Revelation 17:14, where those who are with Jesus are described as “called, chosen and faithful” – words that he illustrated from Stott’s life, whil 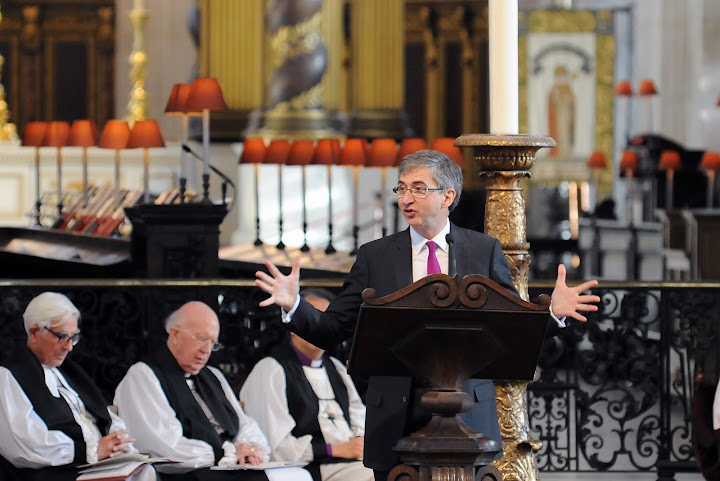 e challenging all present to answer the question that Stott himself would ask, “How is it between you and Jesus?” He recalled John’s sermon at the re-opening of All Souls Church in which he had said he “dreamed, among other things, of a serving church that would be salt and light in society.”

That theme was picked up by Mark Greene and Chris Wright who presented the ongoing vision that is embodied in the two organizations that they lead and which, at Stott’s request, will benefit jointly from The John Stott Memorial Fund – respectively, the London Institute for Contemporary Christianity and the Langham Partnership International. Greene pointed to Stott’s passion that lay Christians should be the agents of the gospel’s transforming power in the frontlines of their places of work, but lamented that this part of Stott’s vision had not been truly grasped or implemented in whole-life disciple-making. As a result, even though there are more Christians in the City of London than in the tents outside the Cathedral, the salt had not been doing its job. Wright pointed to Stott’s complementary passion that, for Christians to be such transformative salt and light in the world, they need the nourishment of applied Bible preaching by pastors who are committed and trained to provide it.

As the echoes of the last lines of the final hymn resounded among the sunlit stone vaults of the vast Cathedral spaces — “Past put behind us, for the future take us / Lord of the years, to live for Christ alone” —  250 miles away another stone stands surrounded only by the music of the sea and sky. A gravestone of rough-hewn Welsh slate now marks the spot in the tiny village cemetery of Dale, Pembrokeshire, Wales, where John Stott’s ashes lie buried. Like the man himself – slender, upright, rooted in the earth but pointing to the heavens – it is inscribed with his own words:

Buried here are the ashes of John R. W. Stott …
who resolved both as the ground of his salvation
and as the subject of his ministry
to know nothing except
Jesus Christ and him crucified.
1 Corinthians 2:2

For more information and additional photos of the memorial service at St. Paul’s Cathedral, visit the John Stott Memorial website.